Maxillary central incisor is the most commonly affected tooth during trauma followed by maxillary lateral incisor and mandibular incisors. Trauma to the anterior tooth requires urgent care because of the essentiality of preserving the natural tooth. When a complicated crown a fracture takes place, it necessitates endodontic treatment and restoration of a fractured crown segment with post in the canal. This case report describes a patient with a broken central incisor and treated with a Richmond crown.

In the teen and young adult years, dental injuries result from motor vehicle accidents, sports, and accidental falls. The largest number of dental injuries to young male enlisted occurring after school hours as a result of fistfights.1 A fourth of the dental injuries in public schools have been observed to be due to fighting and pushing.2 The maxillary central incisor is the most vulnerable tooth, accounting for around 80% of all dental injuries, followed by the maxillary lateral and mandibular central and lateral incisors.3 In cases where the remaining crown structure is not sufficient to retain the full coverage crown, post and core is a treatment option to increase the retention and resistance form of tooth.4 The major concern with the post and core procedure is a fracture of post or root, dislodgement of post-core assembly, loss of the restorative seal, and injury to the periodontium.5, 6 The situation may be further worsening in a patient with deep bite, which leads to maximum oblique forces. In such cases, there should be adequate core reduction, so that the required thickness for a metal ceramic crown can be obtained for better esthetics.4 In 1878, the Richmond crown was introduced with a threaded tube incorporated into the root canal with a screw&#8209;retained crown. The Richmond crown was indicated for a grossly decayed single tooth with very much reduced crown height and with increased deep bite and decreased overjet.7 This case report discusses a patient who had a broken central incisor and a limited interocclusal space who was treated with the Richmond crown using a simple and minimally invasive approach.

A 16-year-old male patient reported to the Department of Prosthodontics and Crown ­& with an endodontically treated maxillary right central incisor and a cracked crown (Figure 1). The patient competed in sports and injured his front tooth 20 days ago. A crown fracture was discovered during a clinical examination, and endodontic treatment was performed. Percussion on the tooth indicated no tenderness and radiographic evaluation demonstrated a satisfactory apical seal endodontically (Figure 2). The diagnostic impressions were taken and a model analysis was performed to determine the amount of restoration space available. To restore the tooth to normal function and aesthetics, an increased overbite and decreased overjet were discovered, therefore the patient was given a Richmond crown with tooth 11. The patient was informed about the complete treatment plan and gave his agreement. 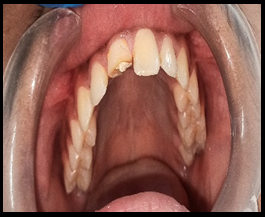 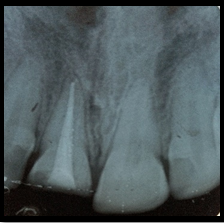 Coronal 2/3 of Gutta percha was removed and Post space was prepared with the help of Peeso reamer leaving 1/3 of GP in apical portion of root (Mani Inc., Tochigi, Japan), and an antirotational groove and finish line were made. Canal was coated with light body impression material (Ornawash L) and then a small piece of orthodontic wire, coated with light body was placed in the canal. Later light body was injected around the prepared tooth, putty impression material (Zhermack zetaplus, Badia Polestine, Italy) was loaded in stock tray and final impression is made and It was then poured with die stone and cast was obtained [Figure 3, Figure 4]. The wax pattern on the cast, the post and core were all made using an indirect procedure, and try in was done in the patient's mouth. The pattern was seated and examined on the cast, and the patient's mouth was tried once again. [Figure 5]. An intraoral periapical radiograph was taken to check the proper seating of the post and core, finally ceramic build was done over the core and shade selection B2 were finalized [Figure 6]. After checking for adequate margin adaption and aesthetics, the Richmond crown was cemented with glass ionomer cement (GC Corporation, Tokyo, Japan).) [Figure 7, Figure 8]. 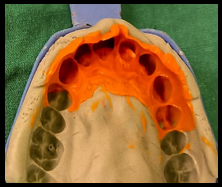 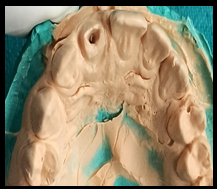 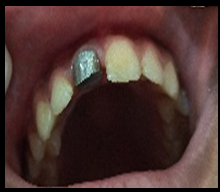 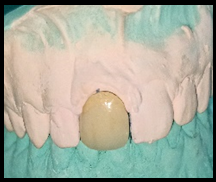 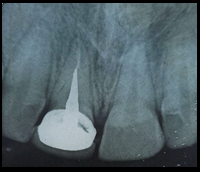 Adhesive material development created newer perspective in fractured teeth reconstruction. Nowadays the reattachment of fractured tooth is successful because of the advancement in the development of bonding agents, which is essential to have good bonding to the tooth structure. Biological circumstances, various materials used, and the methods used are all carefully monitored and maintained throughout reattachment. Whenever possible the fractured segment should be reattached and should be the first choice. The benefits of reattachment are that it will give the patient a positive psychological response, that it will be less expensive than other treatment options such as extraction and replacement, that the colour of the fractured tooth in reattachment will match the adjacent tooth, and that the original contour will be preserved.8, 9 The Richmond crown is a castable customized single‑unit post and crown system with ceramic layer over the crown coping.10 To increase the mechanical resistance and retention, a ferrule collar is incorporated which provides the antirotational effect.11 This design has advantages such as they are custom‑fitted to the root configuration, there was little or no stress at the cervical margin, and also they provide high strength and considerable space for ceramic firing with enough incisal clearance. The Richmond crown has the following drawbacks: they are time intensive, necessitating more appointments for the patient; they are more expensive; and their modulus of elasticity is higher than dentine. The patient had a shattered crown central incisor with restricted interocclusal space, thus a minimally invasive approach was used, and it was decided to offer Richmond crown.

This clinical report describes the rehabilitation of a male patient with fractured maxillary central with the Richmond crowns to improve the function and esthetics with a minimally invasive procedure. There are many post-and-core materials/ techniques available to the clinician for a variety of clinical procedures and thus each clinical situation should be evaluated on an individual basis. Richmond crown is very much indicated in situations with very less incisal clearance to accommodate core + cement + crown thickness.