Materials and Methods: 60 maxillary right central incisor teeth were used in 5 groups for surface treatment on the ridge lap area: 1 untreated, 2-sandblasting, group 3- Heat cure monomer, 4- sandblasting+ monomer, 5- Dichloromethane. The acrylic teeth were attached to a wax block at an angle of 45º. These were flasked and dewaxed, followed by surface treatment and acrylisation. All cured specimens were loaded under a universal testing machine on the palatal surface at a cross head speed of 1mm/min till fracture occurred. Data obtained was statistically evaluated by one way ANOVA.

Results: Surface treatment with dichloromethane showed the highest bond strength of acrylic teeth to heat cure denture base when compared with sandblasting and monomer application. On visual analysis of the fractured specimens, maximum amount of cohesive failures were noticed in the dichloromethane group.

Conclusion: Dicholoromethane can be used as an effective and quick method to improve the bonding of acrylic teeth to denture base.

Tooth loss leading to partial or complete edentulous situations is most commonly replaced by removable prosthesis. Previously materials like vulcanite, plastic and metal were widely used in denture fabrication and in recent years, (PMMA) Denture base resins, Polyethyl ether ketone, Valplast are being used. Most common material used for fabrication of denture prosthesis is denture base resins made of polymethyl methacrylate.

Heat cure polymethyl methacrylate is a translucent, aesthetic, light weight and economical material but has a disadvantage of low fracture resistance. It is available as powder and liquid and the liquid mainly contains methyl methacrylate. These two are mixed together and dentures are processed either by compression moulding or injection moulding technique. A long or short curing cycle can be followed for processing the material.

Acrylic teeth made of cross linked polymethyl methacrylate are most commonly preferred above porcelain teeth as it bonds chemically to acrylic denture base. The acrylic teeth are also easy to trim and adjust. Acrylic teeth are cost effective and require simpler processing equipment for fabrication.

Debonded denture teeth are most commonly re bonded to the same denture base by increasing the surface area of the denture tooth by means of chemical and mechanical methods and the use of autopolymerising denture base resin material.

The denture teeth available have their ridge lap area highly polished and glossy, these can be surface treated before processing the denture by various mechanical and chemical treatments or a combination of both. This will increase the surface area for denture base to contact the acrylic teeth and thus enhance the bonding of both.

Increase in bond strength can be obtained by grinding a diatoric recess or removal of the denture tooth glaze. Various chemicals like acetone, chloroform, tetrahydrofuran, dichloromethane can be used to roughen the ridge lap area of denture tooth. Dichloromethane is a volatile organic solvent also known as Methylene Chloride, having the chemical formula CH2CL2. and M.W 84.93.

Air abrasion with aluminium oxide can cause roughness and micro porosities on the treated surface.

This study aims at evaluating and comparing the bond strength by using various organic solvents and air abrasion for chemical and mechanical surface treatments respectively, as well as a combination of both to create surface roughness.

This experimental study was conducted in the Department of Prosthodontics and Department of Dental Materials, Yenepoya Dental College, Mangalore.

The results obtained were compared with bond strength of the untreated surface on the ridge lap surface of the acrylic teeth.

60 maxillary right central incisors of the same mould shape M1-24 were selected. Test specimens were prepared simulating clinical condition, as described in Japanese Standards Association 6506 (1989).2 A wax block of dimension 10mm×10mm×30mm was made (Figure 1) and the acrylic tooth was attached to it at an angle of 45 degrees to the base of the wax block. This was acrylized and a standard master specimen was obtained (Figure 2). The master specimen was used to make a silicone split mould for fabrication of further test samples. The untreated acrylic teeth were placed in the silicone mould and molten wax was poured to form the base of the specimen (Figure 3). This gave standard angulations’ to all the test specimens (Figure 4). The wax specimens were flasked and dewaxed (Figure 5). 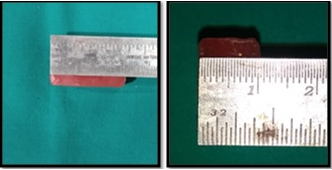 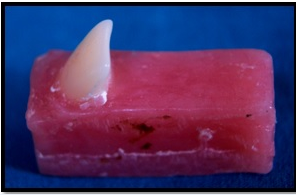 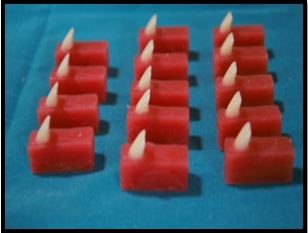 Surface treatment of the test specimen

After ensuring that all the wax is eliminated from the ridge lap surface of the teeth they were treated by the following surface treatments: (Figure 6) 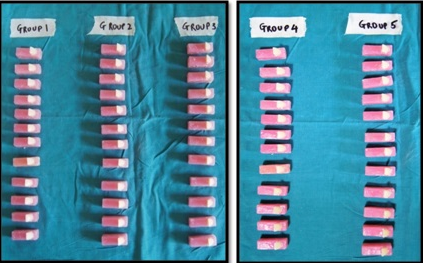 Group 2: Sandblast group (treated with 250 µ aluminium oxide at 4psi for 5 sec in a circular motion at a distance of 5mm from the tooth)

Group 3: monomer group (treated with DPI heat cure monomer liquid applied with a cotton swab on the ridge lap area for 180 sec and then dried)

Group 5: Dichloromethane group (treated with dichloromethane chemical applied with a cotton swab on the ridge lap area for 10 sec.)

After surface treatment of teeth the mould space was packed with DPI heat cure acrylic material and cured according to the manufactures instructions by using compression moulding technique with a short curing cycle in an acrylizer for 1hr 20mins. The specimens were retrieved after deflasking and were trimmed and polished. The specimens were segregated in respective packets and stored in water till testing was done under a universal testing machine.

A metal jig was fabricated in order to hold the specimens in place under the Universal Testing Machine (Figure 7). The sample was held in such a way that a compressive load was applied on the palatal surface using a 2mm diameter testing needle. Constant load at a cross head speed of 1mm/min was applied till debonding of the tooth occurred and it was recorded by a computer software connected to the testing machine (Figure 8).

The computer recorded the load applied in kilograms (kg). This was converted to Newtons (N) by the formula

The bond strength(MPa) was measured by the formula:

The surface area was measured by .

The force required to debond the teeth was tabulated for all the groups. 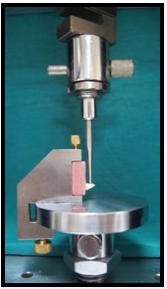 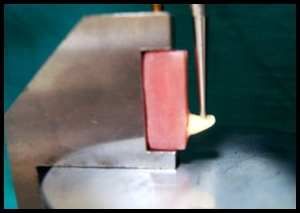 Specimens from each group were selected and the area of fracture was visually observed under a magnifying lamp of 8x magnification lens, these were divided into adhesive, cohesive or combined types of bond failure.

Specimens which showed no traces of damage to the denture tooth or denture base were said to show adhesive failure i.e. debonding occurred exactly at the tooth and denture interface. Specimens that showed debonding with denture tooth material bonded to the denture base were considered cohesive i.e. debonding occurred due to fracture within the acrylic tooth and those showing both were considered combined type. The images of the debonded specimens depicting the type of failures are showed in (Figure 9).

SPSS software (version 22) was used for analysing the data.

Mean and standard deviation of bond strength values of all 5 groups were obtained.

One- way ANOVA was conducted to check for significant difference of bond strength between the five test groups.

Fracture analysis was done for type of fracture seen in sample groups.

The present study evaluated the bond strength after surface treatment with various chemical and mechanical methods. The bond strength of denture tooth to the base was tested. The load required to fracture the bond between the tooth and denture base was obtained in Kgs and converted to Newtons to get bond strength in MPa by using the mentioned formula.(Table 1)

Failure analysis was done by visually observing the debonded samples (Figure 10). The above graph shows the percentage of type of failure seen in each group after debonding. 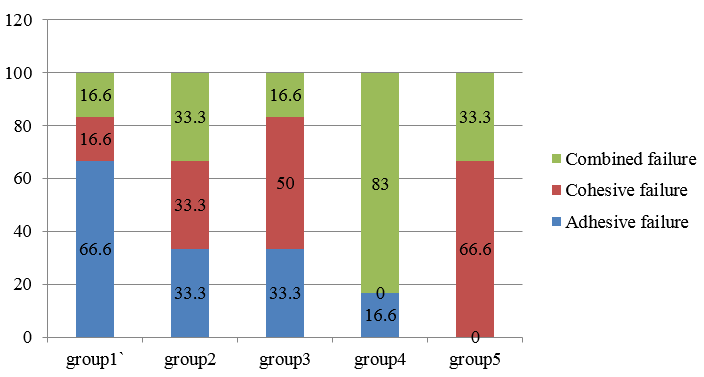 Heat cure acrylic resins and acrylic denture teeth have been used as prosthetic restorations for edentulous ridges. Even though they are used extensively the durability of this prosthesis is a major issue.

In the present study four different surface treatments were performed and the bond strengths were compared with each other and that of an untreated group.

Previous studies state that the type of denture teeth used affected the bond strength after denture processing.9 Premadent ® acrylic teeth (cross linked) which is a commonly available commercial brand was used in this study.

Factors affecting the strength of the bond are often related to the basic properties of the materials used as denture base and artificial teeth. It has been stated that for bonding to occur, the monomer-polymer mix should either swell or dissolve the ridge lap portion (bonding surface with denture base) of the tooth. However, as the degree of cross-linking of teeth or base resin increases, the polymer swells less and bonding becomes more difficult.16

Spratley evaluated bonding of resin denture teeth and suggested that a rough surface may trap wax residue resulting in a decreased bond strength.18

In the present study the group that was treated with 250µ sandblasting (group 2) showed a minimal amount of difference in bond strength values(4.03Mpa) compared with that of control group (group 1).

Similar results were obtained with the MMA monomer group (group 3) where the bond strength was around 4.03±0.7 Mpa. The group 4 (sandblast+monomer) shed a bond strength of 4.61±0.6 Mpa. The difference in bond strength values for group 2, group 3 and group 4 was not significant. Which means sand blasting and monomer treatment did not bring about any drastic improvement in bond strength values. These results were coinciding with the study conducted by Barpal et al., Differences in types of denture teeth, acrylic resin, and experimental technique may contribute to the variability of reported results, in the group containing Lucitone teeth showed highest failure loads when the ridge lap was left with an intact glaze and did not have a diatoric, with no significant influence from the use of monomer.2

Takahashi et al studied that painting the ridge lap area with 1:1 ratio of monomer and dichloromethane considerably increased the bond strength between the acrylic resin teeth and denture base resin. Dichloromethane is a non polymerizable solvent that swells the surface of the denture tooth resin, thereby allowing the monomers from the polymerizing denture base resin to penetrate further into the denture tooth and form a more extensive interwoven polymer network. The micro-roughness present on dichloromethane treated denture teeth also suggests that mechanical retention plays a role in improving the bond strength. Hence, the ridge lap area of the acrylic resin teeth treated with dichloromethane has shown improved in the bond strength when compared to the control group.20

Dicholoromethane produces pores and channels on the surface of acrylic resin teeth which frequently interconnect. This effect is also observed when dichloromethane is applied to heat cure denture base resin. Diffusion of dichloromethane into the resin material is brought about by the prepolymerising pearls of PMMA.19

In the present study highest percentage of cohesive failures were observed in dichloromethane group (group5) indicating that the bond between the treated tooth and denture base was strong leading to cohesive failure within the tooth itself.

Nagai et al. Observed micromechanical retention as a mechanism to explain the advantage of dichloromethane in improving bonding.21

Within the limitations of this study, the following conclusions were made: