Achieving primary stability in dental implants is crucial factor for accomplishing successful osteointegration with bone. Micro-motions higher than the threshold of 50 to 100 μm can lead to formation of fibrous tissue at the bone-to-implant interface. Therefore, osteointegration may be vitiated due to insufficient primary stability. Osseointegration is defined as a direct and functional connection between the implant biomaterial and the surrounding bone tissue. Osseointegration development requires an initial rigid implant fixation into the bone at the time of surgery and a secondary stage of new bone apposition directly onto the implant surface.

Dental implants function to transfer the load to the surrounding biological tissues. Due to the absence of a periodontal ligament, its firm anchorage to bone, various forces acting on it and the presence of prosthetic components, they share a complex biomechanical relationship. The longevity of these osseointegrated implants depend on optimizing these complex interactions. Hence, the knowledge of forces acting on implant, design considerations of implant and bone mechanics is essential to fabricate an optimized implant supported prosthesis.

Dental biomechanics is defined as the relationship between the biologic behavior of oral structures and the physical influence of a dental restoration [GPT-9].

Biomechanics comprises of all kinds of interactions between tissues of the body and forces acting on them and response of the tissues to the applied loads.1 The loads acting on the dental implant are transferred to the surrounding biological tissues. Implant biomechanics can be reactive or therapeutic in nature. It deals with biomechanical factors that are of destructive nature to the implants and the clinical process of altering each biomechanical factor to reduce the cumulative response causing implant overload.2 The biomechanics acting on a natural tooth and implant differ due to various reasons. (Table 1, Figure 2)

Implant biomechanics can be explained under following heads-

Differences between natural tooth and implants 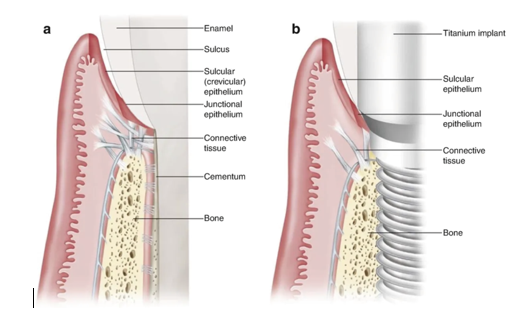 Forces acting on the Implant

Forces applied to the implant may be assessed in type, direction, magnitude, duration and presence of any parafunctional forces. From the simple mathematical equation of Stress = Force ÷ Surface area, it can be observed that, to decrease the stress, the functional surface area should increase or the force should decrease.

Cowin in 1989 suggested that cortical bone is strongest in compression and also can be well tolerated by the bone-implant system.3 Shear and tensile forces, being angular in nature, direct stresses over the crestal bone and bone-implant interface, which can be detrimental to implant in the long run. A 30-degree angled load will increase the overall stress by 50% compared to the load applied along the long axis. 4

The magnitude of forces applied varies based on the anatomical region, age, gender and state of dentition. Craig in 1980 described that the magnitude of bite force is greater in the molar region (200 lb), less in the canine area (100 lb), least in the anterior incisor region (25 to 35 lb) and increases upto 1000lb in the presence of parafunctional habits such as bruxism, clenching and tongue thrusting.5 These parafunctional habits increase the duration of bite forces, that exceed the endurance limit of the implant components and can lead to screw loosening or fatigue failure. 6 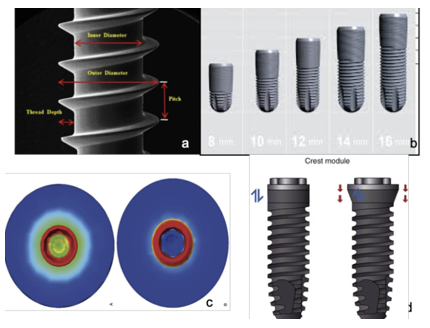 Using Finite Element Analysis, Chia Ching Lee and his colleagues evaluated the effects of implant threads (symmetrical, square and buttressed) on the contact area and stress distribution of marginal bone. 8 Among the three thread shapes, the contact area with square thread was highest and the force dissipation around marginal bone was least. In a study by Eraslanet al, performed with four different thread forms under a static axial load of 100 N, it was observed that maximum stress was concentrated at the cervical cortical regions around the first thread and the stress value was lowest in the square thread type. 9

Pitch is an important geometric factor that determines the bone-to-implant contact (BIC) and the biomechanical load distribution. Thread pitch is defined as the distance between two neighbouring threads, measured on the same side of the axis, It also refers to the number of threads per unit length. implants having smaller pitch indicates more threads, leading to greater surface area.10 In a histological analytical study conducted by Paolo Trisi et al on sheep bone, it was observed that large threaded implants showed significantly higher %BIC and %BV than small threaded implants in low-density bone and statistically higher secondary stability in cancellous and cortical bones. 11

Lead is the distance within the same thread before and after one complete rotation in the axial direction. That is, for single, double, and triple-threaded implants, lead increases by one, two, and three times the pitch respectively. Lead indicates the distance that an implant would move after one turn and it plays an important role on determining the speed of implant insertion. A FEA conducted by Yoko Yamaguchi suggested that, to achieve good primary stability, increasing the thread length and reducing the pitch/lead and lead angle to that of a single-threaded implant is considered more effective versus using a double-threaded implant. 12

An increase in implant length has a benefit for initial stability as overall total surface area increases. It provides resistance to torque or shear forces and also achieves bicortical stabilization.

Wider root form implants have a greater area of bone contact and help in dissipation of forces over a wider area.

Each 0.25 mm increase in implant diameter may increase the overall surface area 5% to 10% in a cylinder implant body.

The crest module of an implant body is the transosteal region, the crest module of the implant has a surgical influence, a biological width influence, a loading profile consideration (characterized as a region of highly concentrated mechanical stress).15 The crest module seals completely the osteotomy, providing a barrier and deterrent for the ingress of bacteria or fibrous tissue during initial healing. (Table 2)

Misch in 1980 proposed that gradual increase in occlusal load separated by a time interval to allow bone to accommodate. 7

A total of six moments (rotations) may develop about the three clinical coordinate axes previously described:occluso-apical, labiolingual and mesiodistal axes( Such moment loads induce microrotations and stress concentrations at the crest of the alveolar ridge at the implant-tissue interface, which lead to crestal bone loss.

Minimization of each of these moment arms is necessary to prevent unretained restorations, fracture of components, crestal bone loss, or complete implant system failure. 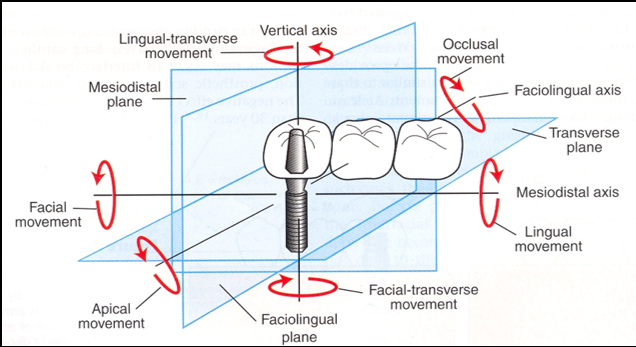 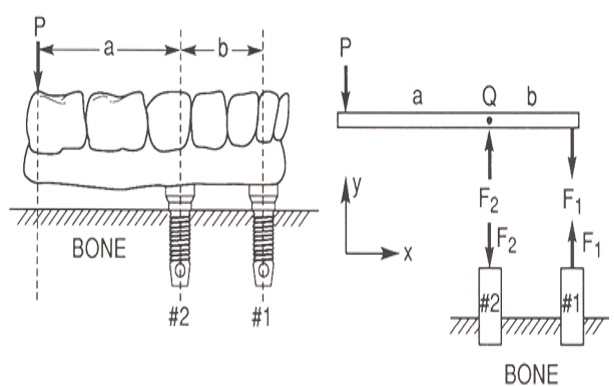 Clinical experiences suggest that the distal cantilever should not extend 2.5 times the A-P distance under ideal conditions [to achieve stabilizing effect].

Patients with parafunction not to be restored with cantilever - More offset loads are applied.

Differences between natural tooth and implant

The success of the therapy in Oral implantology is dependant equally on principles of biomechanics and strict clinical protocol adherence. Failures result if either of these are not followed or taken into consideration. Biomechanics are involved in the conception of a new implant prototype (determining the need for certain modifications to existing designs), producing and testing (in vitro and in vivo) of the implant and all the clinical stages (planning, insertion, loading, maintenance).

Although modern day implants are versatile, present high success rates, increased patient acceptance and comfort, the scope still exists for improvement and research and d evelopment should be directed towards it.

S Szmukler-Moncler H Salama Y Reingewirtz J H Dubruille The timing of loading and the effect of micro- motion on the dental implant-bone interface: A review of the experimental literatureJ Biomed Mater Res1998432192203