Ameloblastoma is a rare, benign tumor of odontogenic epithelium  that was recognized in 1827 by Cusack and renamed ameloblastoma in 1930 by Ivey and Churchill. Ameloblastomas can be found both in the maxilla and mandible with a greater predilection of about 80% in the mandible with the posterior ramus area being the most frequent site. While chemotherapy, radiation therapy, curettage and liquid nitrogen have been effective in some cases of ameloblastoma, surgical resection  remains the most definitive treatment for this condition. Rehabilitation of residual mandibular defect post resection is a challenge due to long span compromised ridge condition and the absence of dentition. In such scenario, a fixed-removable prosthesis allows rapid return to excellent function by providing favorable biomechanical stress distribution along with restoration of esthetics, phonetics and ease of postoperative care and maintenance.

Mandibular defects are generally acquired, usually occurring secondary to tumour resection. The most common odontogenic tumour of the mandible is Ameloblastoma which is unicentric, non-functional, intermittent in growth, anatomically benign and clinically persistent. This tumour is locally invasive, produces marked deformity and serious debilitation and has a remarkable recurrence rate after surgery.1 Marginal en block resection with excision of some amount of clinically normal bone is the most commonly employed approach that results in a predictable outcome.2 A recent meta-analysis revealed that the risk of recurrence was 3.15-fold greater with conservative treatment in comparison to resective treatment.3

Surgical resection leaves behind a residual mandibular defect that impairs mastication, deglutition and speech. The objectives of post surgical Prosthodontic rehabilitation in such cases are to restoration and maintenance of oral function, enhancing the comfort and improvement in the appearance.

Prosthodontic rehabilitation of these large residual intra oral defects involves diverse techniques and varied prostheses and the choice of restoration depends upon multiple factors such as residual dentition, residual bony defect, anatomical relationship of the mandible to maxilla and also patient’s choice. Multiple prosthetic options are available for rehabilitation but due to size and type of defect, a hybrid prosthesis is a preferred option.

After three months of adequate healing, patient reported to us due to difficulty in eating from right side. Clinical and radiological examination revealed missing dentition (34, 35, 36, 37) along with an residual mandibular defect [Figure 2]. The mandibular defect was classified as Cantor & Curtis class I in which radical alveolectomy was done along with preservation of mandibular continuity. The treatment options explored were; removable partial denture and an implant supported FDP after bone augmentation. Conventional tooth supported FDP was ruled out due to length of edentulous span and size of the residual mandibular defect which would have unfavourable long term prognosis. Implant supported FDP was eliminated due to patient’s unwillingness for any additional surgical intervention. Detailed clinical evaluation revealed a long span edentulous region approximately 15 mm and sound abutments (32, 33, 38) teeth with no signs of clinical mobility. Based on the clinical condition and patient’s desire, a rehabilitation plan was formulated to replace the missing dentition and alveolar ridge with a fixed removable hybrid prosthesis. The procedure was explained to the patient and an informed consent was obtained.

A fixed removable hybrid prosthesis was planned as the definitive treatment comprising of porcelain fused to metal restorations utilising lower left lateral incisor, canine and third molar as abutments and a removable prosthesis over the metal framework.

Diagnostic impressions of both the arches were made with irreversible hydrocolloid impression material (Zelgan 2002 Dentsply) and study casts obtained. Diagnostic mock-up was done over which a putty index was made using Polyvinylsiloxane impression material (Express VPS, 3M ESPE). The wax up facilitated fabrication of provisional restorations and determination of optimal position of the Andrews bar in the definitive prosthesis.

The abutment teeth (32,33 & 38) were prepared [Figure 3]. Two&#8209;stage putty light body impression of the mandibular arch was made and poured in die stone. Provisional prosthesis was fabricated using the putty index and cemented with eugenol free provisional luting agent(GC Freegenol). Wax pattern was fabricated with four custom made bar and precision attachments in the region of premolars and molars. The putty index was used to determine the position and angulation of the bar. The wax pattern was sprued, invested and cast using nickel–chromium (Ni&#8209;Cr) alloy. The framework was retrieved and finished. Parallelism was ensured between anterior and posterior retainers (distal surface of 33 & mesial surface of 38) to create guide planes for removable denture. Framework was tried intraorally to assess fit and availability of interarch space. Following this, ceramic veneering was done for both the anterior retainers. The metal framework with auxiliary attachment was cemented using Type I Glass ionomer luting agent[Figure 3].

After cementation of the framework, impression of the mandibular arch was made using irreversible hydrocolloid and cast was fabricated. Maxillomandibular relations were recorded, teeth arrangement done and processing was done using heat polymerized high strength acrylic resin. Laboratory remounting and finishing and polishing of the prosthesis were carried out. The undercuts in the prosthesis were removed before insertion and removable denture was placed on the framework over the attachment [Figure 4]. The denture was evaluated and occlusal contacts adjusted. Post insertion, hygiene and home care instructions were explained and the placement and removal of the prosthesis was demonstrated. Regular follow ups at first week, four weeks and 3 months were carried out with no loss of retention and adaptability of definitive prosthesis. 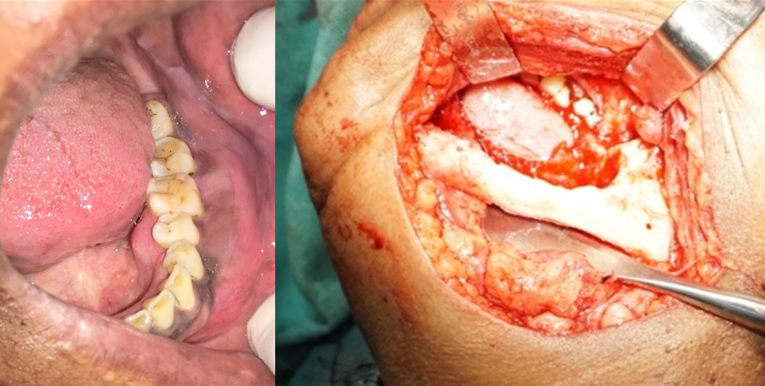 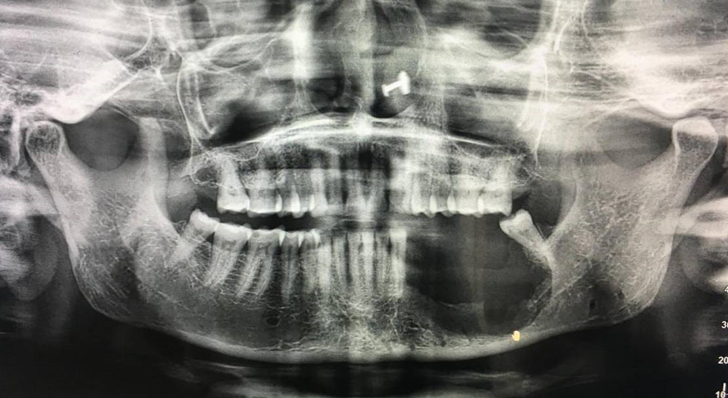 Loss of bony segments and normal tissue anatomy as a result of the surgical resection of oral tumors often presents a challenge in the functional rehabilitation of the patient. Multiple prosthetic options are available for rehabilitation of residual mandibular defects that include removable partial denture (RPD), fixed dental prosthesis (FDP) or an implant retained prosthesis. However, FDP and implant retained prosthesis are not always feasible due to compromised alveolar morphology, especially in large defects. In such situations, hybrid prosthesis with teeth supported metal frame work supporting removable partial dentures is an option that combines the advantages of fixed prosthesis (support, stability, and retention) removable prosthesis (esthetics and hygiene maintenance).4

In the case presented, FDP was ruled out, as it would have compromised esthetics and biomechanics due to overlay of long pontics and long span of the defect. Considering the available bone length and bone graft procedures required, the placement of an implant was a questionable option. Considering the defect size which was greater than 15 mm, age and desire of the patient, hybrid prosthesis was selected.

Dr. James Andrews introduced the hybrid prosthesis where fixed bridge is made of porcelain fused to metal crowns along with a bar and attachment studs which is permanently cemented to the prepared abutment. The removable portion is made of acrylic and is retained on to a fixed bar.5 Various advantages of Andrews’s bridge as reported in literature are better esthetics, adaptability and phonetics, economical, retention, comfort to the patient and stability with minimal extension. It acts as stress breaker and avoids transfer of unwanted leverage forces to the abutment teeth. Cheatham and Mueninghoff reported that the hybrid prosthesis is generally indicated when the placement of the conventional FDP would compromise esthetics and the defect has a greater loss of alveolar ridge and soft tissue.6, 7 Shetty and Patel have described techniques using Andrew’s bar system for oral rehabilitation of missing anterior teeth with ridge defect.8, 9 Wangoo has elaborated techniques using either prefabricated or custom made attachments for oral rehabilitation of missing teeth with ridge defects.10, 11

The technique and rationale of hybrid prosthesis has been discussed, wherein a large mandibular defect was rehabilitated with a fixed removable hybrid prosthesis that produced optimum functional and aesthetic results. This prosthesis allowed the pontic to be entirely ridge borne (only retained and stabilized by bar) and combined advantages of both fixed and removable prostheses ie; withstanding the masticatory forces that develop during function without compromising esthetics, phonetics, comfort and hygiene.