Residual ridge resorption is the reduction in size of the bony ridge under the mucoperiosteum. Obtaining retention and stability in a severely resorbed ridges using a conventional technique is a tedious task. The resorption occurs at a faster rate in mandibular arch as compared to the maxillary arch. In order to have a favorable prognosis for the denture therapy, impression technique selected should be based on the present state of the basal tissue support for mandible. In this article neutral zone concept was incorporated in to impression making in an effort to achieve successful mandibular complete denture. The anterior region of maxilla is the most affected area in edentulous patients. Complete denture wearers with flabby ridges may face a number of difficulties, of which major complaints would be pain, compromised stability, support, and retention and an ill-fitting denture. Special impressions often involve window technique for static impression of flabby area, which present multiple challenges. This article presents a case report of modified widow impression technique for maxillary anterior flabby tissues along with a hollow maxillary complete denture in a patient with resorbed maxillary and mandibular ridges with increased interridge distance to reduce the weight of the prosthesis and thereby enhances the retention.

Loss of teeth leads to multi factorial changes occurring in the mouth resulting in alveolar ridge resorption, expansion of the tongue, and laxity of muscles of face.1 Severe resorption of the edentulous maxillae and mandible are generally associated with difficulty in rehabilitation. With the advancing age, long term wearing of ill fitting denture results in bone resorption especially in the anterior maxillary edentulous foundation. This results in poor quality denture bearing area leading to excessively resorbed ridges and flabby tissue. This tissues may give to pain or looseness of the denture.2 Various impression techniques were practiced in order to improve the stability of the denture by minimizing the tissue compression. There are patients who wear illfitting dentures as there is poor stability and retention especially in the mandibular arch because of tissue abuse due to continuous wear of the same prosthesis for longer period or laxity on the part of clinician.3 The success of any prosthesis depends on the proper position of the artificial teeth within the neutral zone. Neutral zone is a potential area where forces generated in an outward direction from the tongue are being neutralized or balanced by the inward forces generated by lips and cheeks during functional activities.3

Prosthetic rehabilitation of severely resorbed maxilla with complete may lead to a heavy prosthesis thereby reducing the retention and resistance.4 This can be overcome by making the denture base hollow reducing the overall weight of the prosthesis. Different approaches like using a solid 3-dimensional spacer, including dental stone , cellophane wrapped asbestos , silicone putty or modelling clay have been used during laboratory processing to exclude denture base material from the planned hollow cavity of the prosthesis. Fattore et al. and Holt have used different techniques for fabricating a hollow prosthesis.5 This clinical report describes the recording of the neutral zone in the mandible a modified impression technique for the flabby tissue and fabrication of a hollow maxillary complete denture in a patient with flabby maxillary anterior ridge and mandibular ridges with increased inter ridge distance.

A 67 year old male patient reported to the Department of Prosthodontics, Government dental college research institute, Bengaluru with a chief complaint of difficulty in mastication, loosening of upper and lower dentures and poor esthetics for the past 2 years. He also complained of movement of denture during swallowing and speaking. On clinical examination, patient had no gross facial asymmetry. The TMJ, muscles of mastication and facial expression were asymptomatic. No gross abnormalities detected in the overall soft tissue of the lips, cheeks, tongue and oral mucosa.

Intraoral examination revealed severely resorbed maxillary edentulous maxillary ridge with severely displaceable anterior flabby ridge was and flat atrophic mandibular ridge (Atwood order V). The treatment plan included a maxillary and mandibular complete denture by locating the neutral zone and arranging the denture teeth accordingly and contouring the complete denture polished surface in order to achieve the maximum prosthesis stability comfort and function. A special window impression technique using PVS material for the definitive impression was considered for the flabby tissues. Due to increased interocclusal space, to reduce the weight it was decided to fabricate a hollow maxillary denture with conventional mandibular denture.

The primary impression of maxillary was made with alginate wash impression and mandibular arch made with impression compound material (Figure 2). The impressions were poured in plaster of paris and primary casts were prepared. The custom trays were fabricated with self cure resin with wax spacer over the primary casts keeping the borders 2mm short of the sulcus.

The record bases were fabricated and wax rims were made over the record bases for recording the maxillamandibular jaw relations and mounted in a mean value articulator.

The wax rims were cut at three regions -first molar and central incisor regions and replaced with autopolymerizing resin. These resin pillars will now act as vertical occlusal stops. Now the remaining wax is removed and is attached with retentive loops made of thin orthodontic wire (Figure 6).

The record bases are trimmed and checked in the patient’s mouth. Mixture of 3 parts of impression compound and 7 parts of green stick compound in kneaded in a hot water bath and placed over the retentive loops and the neutral zone recorded in patients mouth. During this procedure the patient was asked to make the movements like puckering lips, swallowing, sucking, pouting, grinning and by producing exaggerated sounds like OOO and EEE to record the neutral zone. Excess material if any will be displaced and should be removed. In case of insufficient material, additions can be easily made using extra material.

Now the mandibular rim was adjusted at the same vertical height with maxillary rim and the mandibular compound rim was then replaced on the articulator to evaluate the vertical relation again.

The impression compound rim was relined with zinc oxide eugenol impression paste (Figure 8) and dental plaster index was constructed (Figure 9). The compound rim was then removed from the record bases (Figure 9). The index was rearranged and wax flowed into the space to make an occlusal rim to confirm to the patient’s neutral zone (Figure 10). The teeth arrangement was carried on this occlusal rim and the trial denture was verified using the dental plaster index to confirm the position of the teeth is within the neutral zone (Figure 11). Try in was carried in the patients mouth. Final try-in procedures were completed (Figure 12).

Extra oral view of the patient 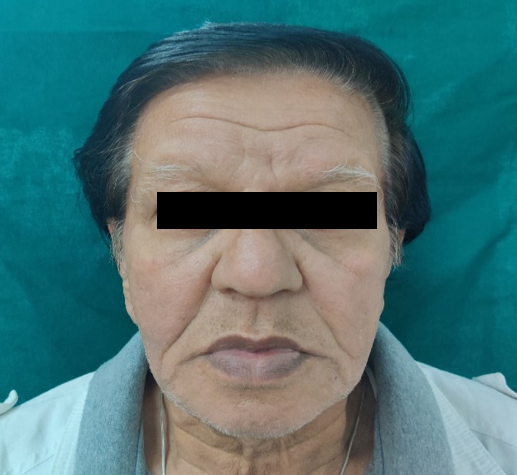 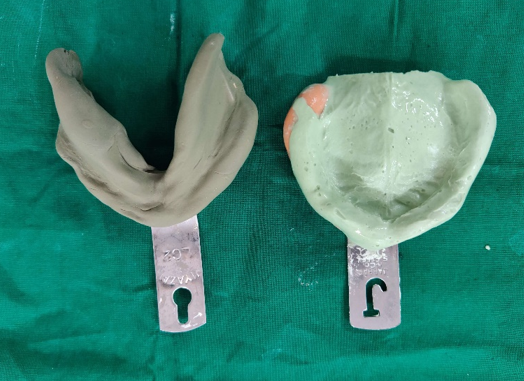 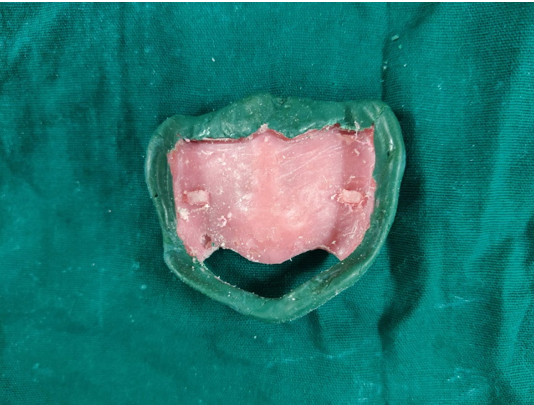 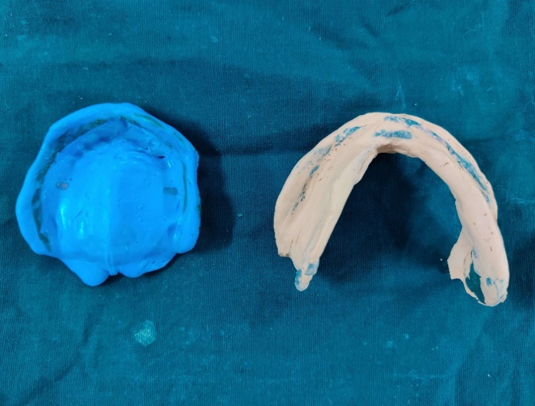 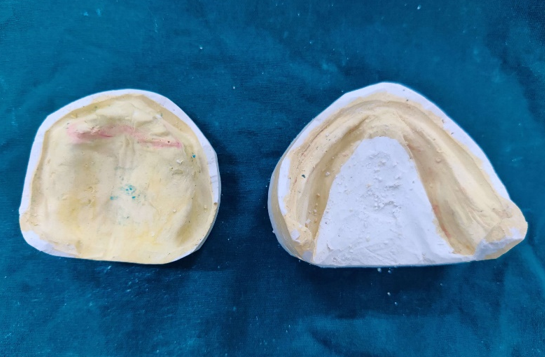 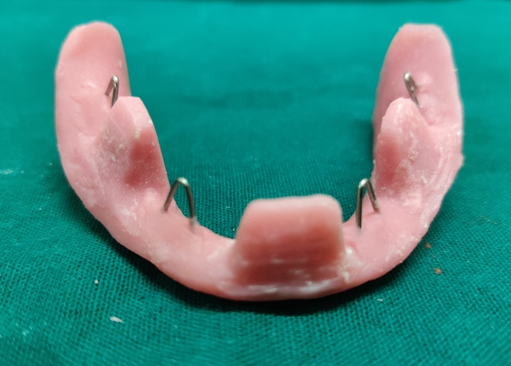 Relation between upper rim and lower resin record base in ariculator 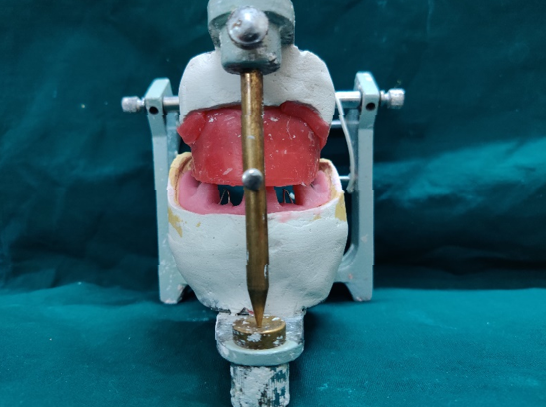 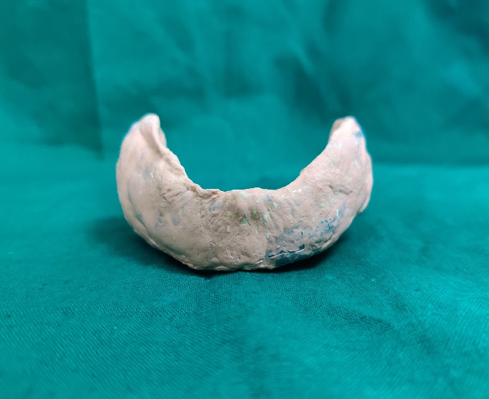 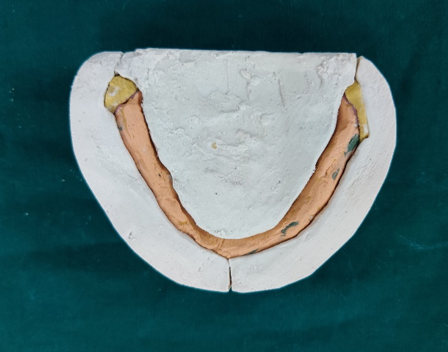 Record base in dental plaster 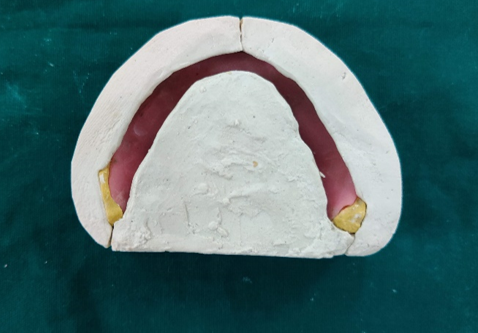 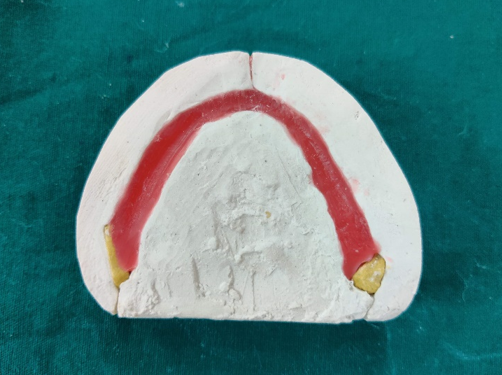 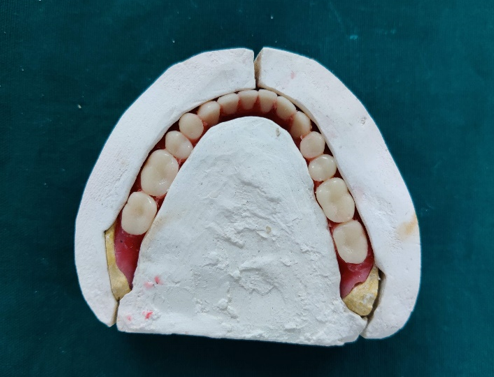 The hollow maxillary complete denture was fabricated using the two flask technique described by Fattore et al. The try-in maxillary denture was invested and dewaxed. Baseplate wax was then adapted to the tooth side and cast side of the dental flask.

Following trial closure, the two halves of flask were closed and cured using a long curing cycle. Once processed, the denture base was finished and polished. The denture borders were evaluated for any fluid seepage into the denture cavity by weighing it before and after placement in water (Figure 16). Once the seal was evaluated, the dentures were inserted in the patient’s mouth (Figure 17).

The patient was satisfied with the new complete denture as it was retentive, stable and increased chewing efficiency. The patient was recalled after 24 hrs, 1 week, 1 month and 1year for follow up and was evaluated for retention and stability. 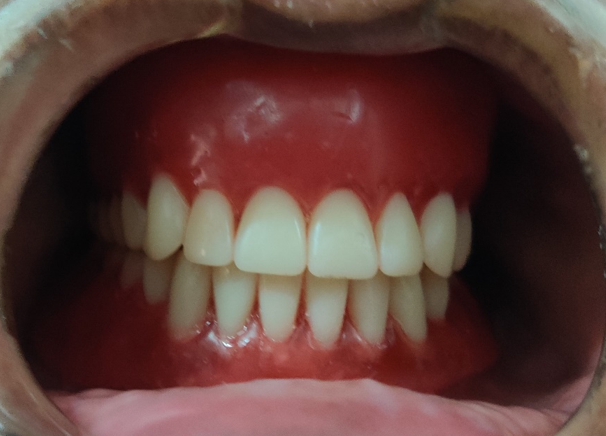 Extra oral view of the patient during wax trial 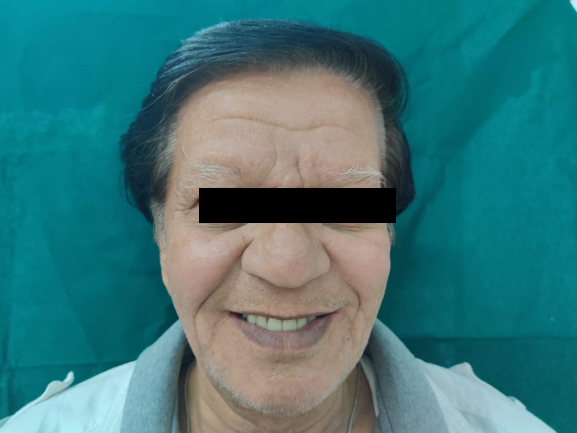 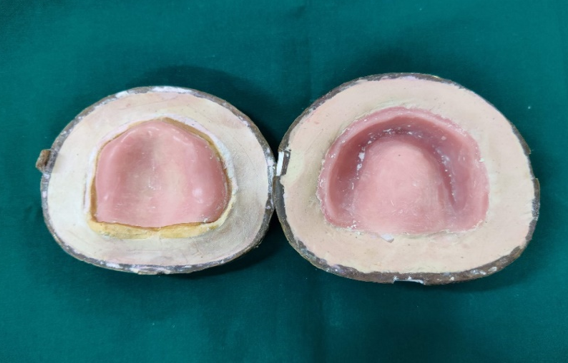 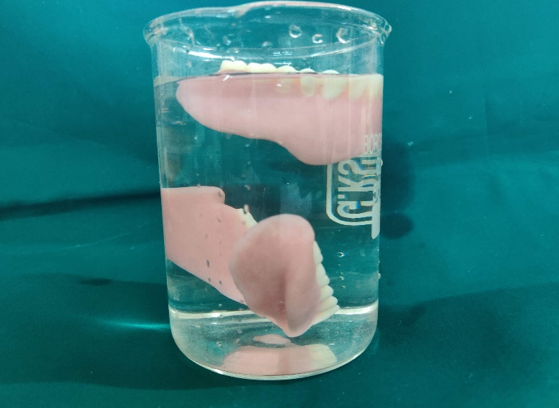 Extra oral view of the patient after denture insertion 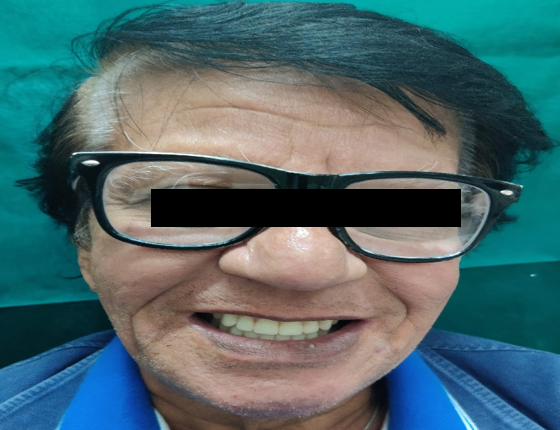 A window technique is used for impression of flabby ridge using a close fitting custom tray with a window. Using these techniques, a mucocompressive impression is recorded for healthy tissues using zinc oxide and eugenol or regular body PVS and a custom tray. In addition PVS materials are preferred by clinicians as they are available in different viscosities suitable for mucostatic and muco-compressive flabby ridge impressions. Moreover, the modified window technique allows the application of low viscosity materials in addition to the minimal exertion of pressure to the flabby ridges. Therefore the authors recommend clinical application of this modified window technique using PVS impression materials for final impression of flabby maxillary ridge in the fabrication of complete dentures.6

Providing stable mandibular dentures for patients with severely resorbed mandibular ridges is a challenge. One can overcome this problem if dentures are fabricated with their contours harmonizing neutral zone. The dentures will have advantages such as reduced food lodgement, good esthetics due to facial support, proper positioning of the posterior teeth which allows sufficient tongue space.

Arranging artificial teeth within the neutral zone achieves two important objective: (1) prosthetic teeth do not interfere with normal muscle function; and (2) normal oral and perioral muscle activity imparts force against the complete dentures that serves to stabilize and retain the prosthesis rather than cause denture displacement.1

In this case report, the entire procedure was aimed at using the materials that have compatible properties and are available easily by the chair side, therefore, impression compound, green stick compound and ZOE was used as they are easy to manipulate.

Severe ridge atrophy results in increased inter-arch space, unstable and non retentive dentures with inability to withstand the masticatory forces. The negative effects of ridge atrophy were managed by modifying the conventional procedures of fabricating a complete denture. In this case a hollow maxillary complete denture was given in order to decrease the weight of prosthesis. 7, 8, 9

This article provides a novel approach in the management of completely edentulous patient with flabby and resorbed ridges. For flabby ridge impressions, a modified window technique described an effective way for controlled application of light body PVS impression material, for a non displacing final impression of flabby ridge. For severely resorbed mandible, the neutral zone technique for denture fabrication has an advantage that it stabilizes the denture with the surrounding tissues, instead of being dislodged by them. Prosthodontic rehabilitation of a patient with compromised edentulous ridges in a conventional manner is a difficult task. Modifications in the treatment procedures should be considered to fulfil the patient’s functional and esthetic desires. Though unconventional, a hollow maxillary complete denture can be given to a patient with severe ridge atrophy and increased inter-arch space.