Javed, Jindal, Khan, and Sharma: Management of developmental disturbances in a 12 year-old child- A multidisciplinary approach

The permanent teeth agenesis affects children both physically and emotionally grievously, especially during the years of transition into adolescence. According to Hobkirk et al. 1994, the patients with hypodontia most commonly complain regarding their appearance or function, and most of them are detected at the age of 6–12 years, as late eruption is noticed by the dentist or commented upon by the patient or parent.1 Congenitally missing teeth is a result of disturbances during the early stages of development.2 The prevalence of congenitally missing teeth in the permanent dentition excluding the third molars ranges between 0.15% and 16.2%. Indians have shown very low prevalence rates between 1-4%.3, 4

Thirty to forty percent of children suffer at least one injury to their primary teeth and it is not gender specific.5  During injury to primary teeth, developing permanent tooth germ is most vulnerable to trauma owing to its close proximity to the former. 5 Tooth development stage, relationship between permanent tooth and roots of deciduous tooth, direction and degree of force govern the type and severity of disturbance. 6, 7Three percent of the total injuries to the developing tooth bud comprise dilacerations. 8 Dilaceration can be defined as an angular position between the two parts of a tooth.3, 9 This is because the calcified part is displaced in relation to the uncalcified part leading to abnormality in the formation of the tooth. 9

A 12 year old girl reported to the Department of Pediatric and Preventive Dentistry, Dr. Ziauddin Ahmad Dental College, AMU, Aligarh with a chief complaint of unerupted front teeth. History revealed that the child had a trauma five years back due to fall from height. No dental treatment was taken for the same. Patient was asymptomatic and was concerned only for the unerupted front teeth. Medical history was not contributory.

Intraoral examination revealed missing 11, 31 and 41 as well as retained 71 (Figure 1a). Intraoral periapical radiographs (Figure 1b,c) of the mandibular and maxillary anterior teeth as well as orthopentomogram (Figure 1d) showed 31 and 41 were congenitally missing. Root of 11 was at an angle with crown and was placed upside down. On the basis of history, clinical findings and investigations, diagnosis of congenitally missing teeth i.r.t 31 and 41, crown dilaceration i.r.t 11, as well as retained tooth i.r.t 71 was made.

Based on above findings, treatment plan formulated was, surgical extraction of dilacerated 11 and retained 71 and rehabilitation of edentulous spaces i.r.t tooth no. 11, 31and 41 with removable partial denture. 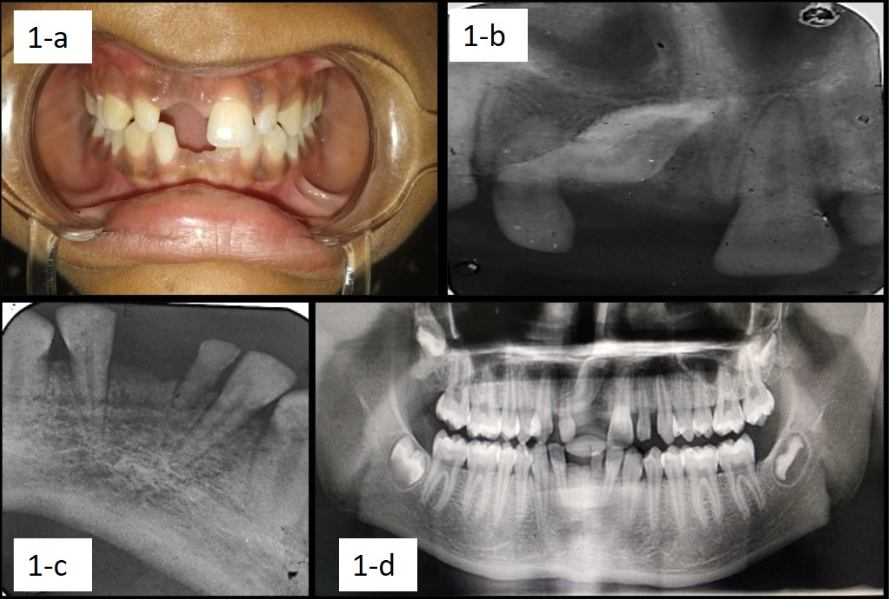 Patient was given one dose of antibiotic tab Augmentin 375mg and an anti-inflammatory drug Ebility 385mg ½ tab one hour prior to surgery. Following that, patient was prepared for the surgery (Figure 2 a), infraorbital nerve block was given using 3ml of 2% lignocaine with adrenaline (Lignox 2%, Indoco Remedies Ltd.) on right side while local infiltration in 21 area. As the incisal half of the crown was apically placed, intrasulcular incision was given along with a single vertical releasing incision (Figure 2b). Full thickness flap was raised with the help of periosteal elevator and a bulge was seen on the buccal plate (Figure 2c). Bone cutting was done using bone cutting carbide bur mounted on straight hand piece to expose the tooth. The tooth was removed with the help of the periosteal elevator (Figure 2d). The tooth was dilacerated (Figure 3a) and its form was so distorted that it could not be repositioned. After extraction, interrupted mattress sutures were given using 3.0 black silk suture material (R822-Ethicon) (Figure 3b). Another periapical radiograph for maxillary anterior region was taken (Figure 3c). The patient was instructed to continue with tab Augmentin 375mg TDS, tab Metrogyl 200mg TDS, ½ tab Ebility 385mg TDS, tab Ramicep 20mg OD for three days, tab 24-Well OD for one month and betadiene gargles for a week. The patient was recalled after a week for suture removal and evaluation. Healing was uneventful. After two weeks, patient was called again and temporary rehabilitation was done and patient was given a removable partial denture i.r.t 11, 31 and 41(Figure 3d). Permanent rehabilitation was planned after the patient reaches 15 years of age, so till then patient would be kept on regular follow ups. 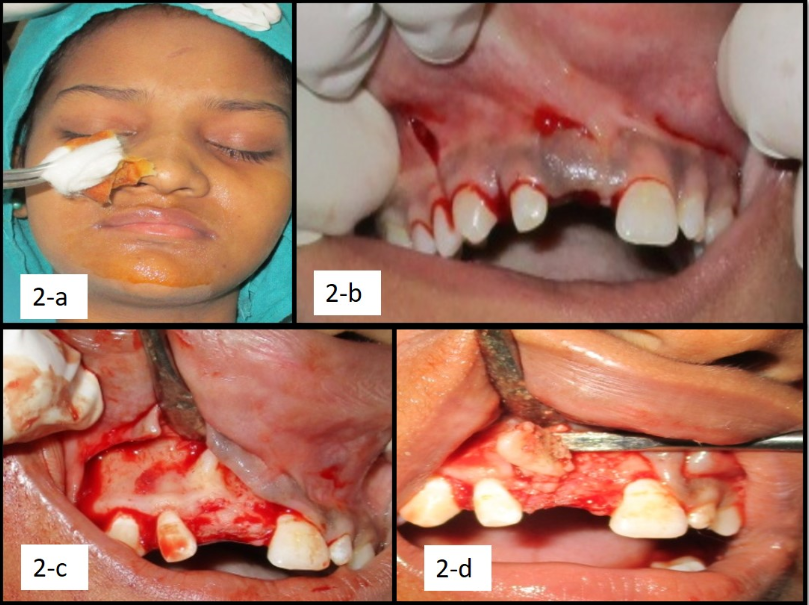 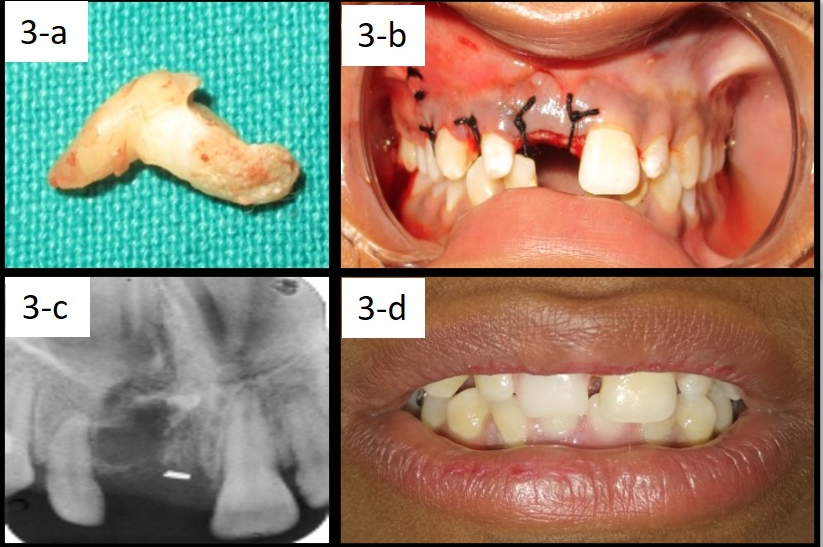 Jones 10 described three types of hypodontia which include mild (1 or 2 teeth missing), moderate (3–5 teeth missing), and severe (above 6 teeth missing). Hypodontia can also be classified as isolated or nonsyndromic and syndromic or hypodontia associated with the syndromes. 11 An early consideration of the likely definitive replacement for missing teeth forms the basis for the multidisciplinary management of hypodontia. Provision of fixed prosthetic reconstructions in children with hypodontia is contraindicated because of the need to await complete eruption and root formation of permanent abutment teeth with huge pulp chambers. The removable partial dentures and resin-retained bridgework has been used as interim restorations for missing teeth to maintain appearance and function. 12

The permanent incisors tooth germs are situated lingually to the apices of the primary teeth initially. During development, they get nearer to the resorbing roots of the primary teeth. If due to trauma, the already calcified part of the germ is displaced, in relation to the uncalcified part, dilacerations or circular hypoplasia may occur. 13 According to Meyer, bone wound is produced after displacement of the deciduous tooth, followed by scar formation, which results in root curvature. The calcified part is pushed into an abnormal direction against the scar by the developing root. Van Gool (1973) has emphasized that dilaceration often follows traumatic injury to the deciduous predecessor, in which the tooth is driven apically into the jaw. 9

In the present case, the crown was displaced apically and the most probable reason is the trauma that occurred five years back. Another reason may be that patient might not remember exactly when the trauma occurred and it could have occurred even before the aforementioned time. We used nerve block in the region of surgery and local infiltration in 21 area because surgery involved depth and wider surface area in anterior region. Lignocaine was used as an anesthethic agent because for infraorbital nerve block, lignocaine and bupivacaine are the two most common anesthetic agents and lignocaine has faster onset and shorter duration than bupivacaine.14 In this case, intrasulcular incision along with single vertical incision was given as technique allows easy flap repositioning after periapical surgery.15 The tooth was also so distorted that it could not be repositioned, so extraction was planned followed by replacement with a temporary prosthesis until growth ceases after which permanent prosthesis would be planned. Approximately 98% of all facial growth ceases by the age of 15 years in girls and 17 or 18 years in boys.16, 17 We planned a temporary prosthesis since because of the COVID period, we wanted to reduce the exposure as well as the number of visits of the patient. Otherwise, mini-implants might be another option.18 The patient continues to be on periodic evaluation.