Oral cancer ranks among the top three in the country and is major health problem. In India, people affected generally belong to the low-income groups due to a prevalence of habits such as tobacco chewing and lack of awareness and capability to afford the diagnostic and treatment modalities Oral cancer is defined as the cancer of lips, mouth and tongue.

The management of cancerous lesions in maxilla and mandible is difficult due to their proximity to vital structures, especially in cases of maxilla wherein due to its strategic anatomic location, comprising of the skull base and its related structures, any radical treatment is deferred. Moreover, the anatomic complexities and the cancellous nature of the bone make it very difficult to achieve wide and clear surgical margins resulting in poor prognosis.

The comprehensive management comprises of multidisciplinary team effort comprising of surgical resection of the tumour along with the prosthetic rehabilitation to restore the lost form and function. It may also include chemotherapy or radiation therapy.

The incidence and prevalence of oral cancer shows a very high rate in India, third amongst all the cancers and is a major health concern.1 The lower socioeconomic group is generally affected due to deleterious oral habits such as tobacco and pan chewing and palate is the most common site.2

The lesions are generally extensive due to inherent nature of the bone, the oral habits and the ignorance regarding the lesion and the diagnostic aids. Maxilla being more cancellous and porous in nature, allows evasion of tumor cells easily compared to that of mandible. The gold standard of management is surgical resection; partial or subtotal maxillectomy, but there are always chances of partial infiltration of few tumor cells in the remaining part of maxilla. The challenges for the surgeon are the oncologic safety, maintenance of form and function and creating minimum post operative morbidity.5, 6, 7 Chemotherapy and radiation therapy have proved to be effective adjuncts but cannot be termed as curative therapies alone.

Post resection, residual maxillary defects create an open link between the oral and nasal cavities resulting in impaired deglutition, speech and appearance. Apart from the physical effects, it also produces a psychological impact on the patient and family as well.

Due to increase in the overall life span of the individuals and increased emphasis on living an improved quality of life, mere surgical resection of tumour is not sufficient. Prosthodontic intervention is essential to close the oroantral communication. For optimum restoration of speech, mastication and esthetics thereby restoring the self esteem and confidence of the patient o lead a dignified life in the society.

This paper aims at highlighting the role of multidisciplinary approach in successful management of patient with cancerous lesion in maxilla.

Head and neck surgeries involves various treatment modalities, maxillectomy being one of them. It was first described by Lazars in 1826 and first performed by Syme in 1829. The earlier attempts at this surgery failed due to excessive bleeding and infection that resulted in high morbidity and mortality. In 1927, Portmann & Retrouvey suggested sublabial transoral approach that had the advantage of avoiding extraoral scars. In 1950s, with the advances in the field of anesthesia and surgical techniques, total maxillectomy evolved as a viable treatment option for malignant maxillary lesions. Weber Ferguson devised an approach making lateral rhinotomy incision which resulted in reduced cosmetic deformity.

Maxillectomy is a procedure to remove primary tumor in the maxilla. The procedure involves surgical removal of some of the bone, part of roof of mouth and some of the teeth. There are different types of maxillectomy:

Indications include removal of malignant and benign tumors of the nose and paranasal sinuses, tumors of the oral cavity that extend into the hard palate, as part of the treatment of fulminant invasive fungal sinusitis. Contraindications include general patient infirmity, tumor extent requiring bilateral orbital exenteration and tumor eroding or invading through the skull base.

Important considerations before deciding on surgery are extent and histopathology of the lesion, Involvement of adjacent areas and precise location of the bulk of the mass.

After diagnosis and treatment planning, the procedure needs to be explained to the patient and the family and an informed consent needs to be obtained.

The surgical planning and reconstruction should be considered in three phases. First, assessment of the bony and soft tissue structures to be included for en bloc resection should be done. Second, the approach must be designed to provide adequate exposure while preserving functional tissue and cosmetic integrity whenever possible. Third, the repair should be planned to use prosthetics or soft tissue techniques to best advantage. 8

Brown et al 9 and Cordeiro and Santamaria 10 separately developed very similar and accepted classifications. Brown et al describe maxillectomy defects by independent vertical and horizontal components (Table 1). The vertical dimension (classes 1–6) designates the extent of unilateral involvement, with emphasis on the orbit. The horizontal dimension (letters a–d) designates the amount of palate and alveolar ridge sacrificed .Thus, 24 possible designations characterize maxillary defects in this system, in which almost all the possible lesions are incorporated and a systematic reconstructive decision-making algorithm is provided. In the second classification, Cordeiro and Santamaria described a simplified 4-part classification scheme: (Table 3)

This classification evaluates the surface area to volume requirement, the need for palatal closure, and the need for orbital reconstruction. Although the classification system by Cordeiro and Santamaria adequately addresses the 3-dimensional anatomy of the maxilla, it does not clearly select the patients who would be good.

Talks to the patient as well as the family and prepares them so as to avoid a sudden shock postoperatively due to loss.

According to Desjardins (!977), Preoperatively, the Prosthodontist is concened with 4 objectives; Psychological support of the patient, preoperative dental management, preoperative impressions and suggestions for the surgeon. Prior to surgery, he gets the resection line marking done in consultation with the operating surgeon. Based on that, surgical Obturator is fabricated and kept ready at the operating table to serve as framework over which tissues may be shaped by the surgeon, holds the surgical dressing, serves as a temporary prosthesis and helps to restore of esthetics soon after surgery. (Figure 1)

Prosthodontic considerations to be conveyed to Oncosurgical team: 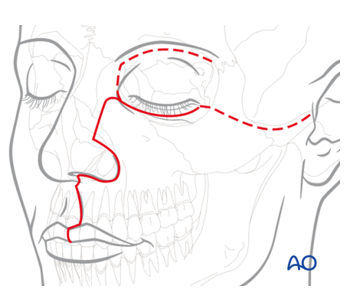 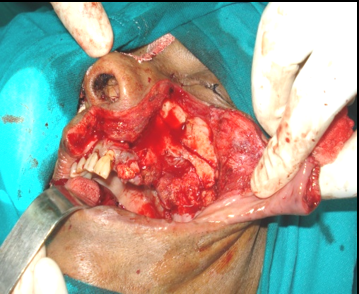 Before the incision, area should be marked and infiltrated with 1% xylocaine with 1 in 100,000 units adrenaline (Figure 2) that helps in minimizing intraoperative bleeding. The modified Weber Ferguson incision used in total maxillectomy has three components (Figure 3).

Identification of lacrimal sac and duct

The lacrimal sac is identified, dissected and retracted. The nasolacrimal duct is usually transected at its junction with the sac and is marsupialized by dividing the sac and suturing the edges to the periorbita that aids in identification of orbital involvement.

This is transected laterally at the malar buttress with a Gigli’s saw. The medial orbital rim is transected just below the frontoethmoidal suture line. In tumors involving roof of ethmoid require skull base resection in order to provide adequate tumor margins. If fovea is not involved by the disease then ethmoid bone is removed along the frontoethmoidal suture line to provide adequate exposure.

This procedure is done with an osteotome / reciprocating saw. Palatal division is started about 2-3 mm from the ipsilateral nasal septum. This can be modified to suit tumor margins. Lateral incisior if present and uninvolved, can be preserved for prosthetic rehabilitation. The central incisor can be compromised. It is easy to use osteotome from the cavity of central incisor after removing it. After completing palatal osteotomy the soft tissue attachments between hard and soft palate are freed using sharp dissection / unipolar diathermy cautery. Osteotomies over lateral orbital wall and posterior floor of orbit are completed thereby allowing down fracture of maxilla. Attachment of maxilla to pterygoid palate can be removed using a curved osteotome and maxilla freed by lateral rocking movements. At this stage brisk bleeding may be encountered, usually due to internal maxillary vessels and pterygoid plexus. Packing the entire area using a hot pack helps in controlling bleeding. If not controlled, then individual vessels need to be cauterized using bipolar cautery. After the entire maxilla is removed, the area is washed with saline and betadine solution.

A 0.014 to 0.016 in. thick graft is usually harvested from the anterolateral thigh and used to reline the raw buccal mucosa area (Figure 4). The graft is sutured to the cut edge of the buccal mucosa with 4-0 chromic catgut. Xeroform and strip gauze coated with antibiotic ointment are packed into the defect to secure the skin graft. The previously fabricated surgical obturator is wired to the remaining teeth to hold the packing in place (Figure 5, Figure 6). Wound closure is done in layers. 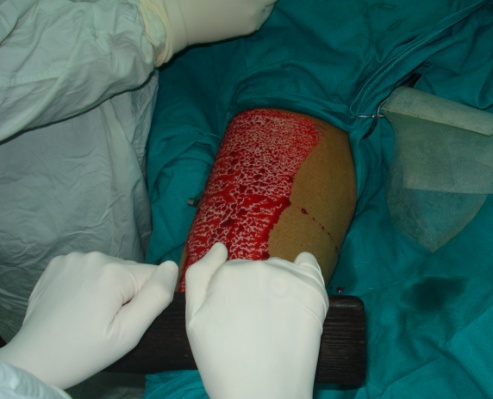 Surgical management leads to loss of maxilla, soft palate and contiguous structures leading to a communication between the oral and nasal regions that causes difficulty in speech, deglutition, mastication, respiration and loss of facial support. Residual maxillary defects post surgical resection were classified into 6 categories by Mohd. Aramany in 1978 (Figure 4).11 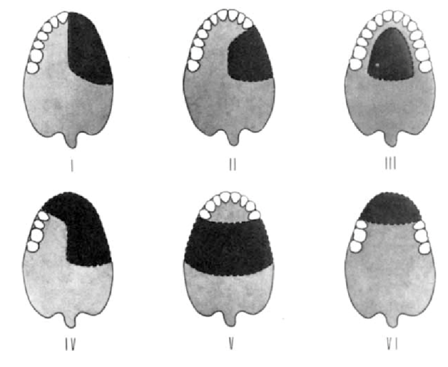 The resection is performed along the midline of the maxilla; the teeth are maintained on one side of the arch. This is the most frequently seen maxillary defect.

The is unilateral, retaining the anterior teeth on the contralateral side.

The palatal defect occurs in the central portion of the hard palate and may involve part of the soft palate. The surgery does not involve the remaining teeth.

The defect crosses the midline and involves both sides of the maxillae. There are few teeth remaining which lie in a straight line.

The surgical defect in this situation is bilateral and lies posterior to the remaining abutment teeth.

It is an acquired maxillary defect anterior to the remaining abutment teeth that is rare.

The goal of prosthetic rehabilitation is to restore the basic functions of mastication, deglutition, speech and improve esthetics thereby boosting the psychological status of the patient. The prosthetic options include maxillary obturators for defects of the hard palate, pharyngeal obturators for defects of the soft palate, and maxillopharyngeal obturators for defects that include both structures. The improvement in the speech with prosthetic rehabilitation has been described in literature. 12, 13, 14, 15, 16, 17, 18 Prosthetic intervention leads to a restoration of dentition, reduction of hypernasality/.19, 20 It also reduces the nasal leakage when swallowing liquids or foods.21, 22, 23, 24 Rehabilitation with an obturator also allows visualisation of the defect for ongoing cancer surveillance 16, 25 and restoration of function with minimal surgical intervention.  However, several disadvantages of the prosthetic approach exist; discomfort of wearing a prosthesis, inconvenience of removing and cleaning the prosthesis, the inability to successfully retain a prosthesis when the defect is large or in case of missing dentition and the frequent need for readjustments by a Prosthodontist.16, 26

These drawbacks have led to the search for alternate solutions, the foremost being palatomaxillary reconstruction with microvascular free flaps. Studies that compare prosthetic obturation with reconstruction of a palatomaxillary defect demonstrate some advantages to reconstruction, in particular, quality-of-life issues including comfort, convenience, and decreased feelings of self-consciousness.27

With respect to speech and swallowing, comparable outcomes have been seen in palatomaxillary rehabilitation with prosthetic intervention and flap reconstructions.28, 29 The exception to these findings is when the maxillary defect is extensive or when the anterior palate, including both canines, is resected, in such cases, free-flap reconstruction produces better outcomes than the prosthetic rehabilitation.30